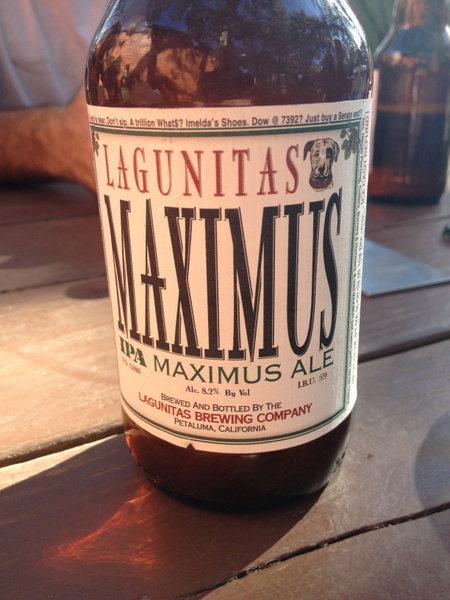 Someone always has a beer that they want me to try.  Not that I am some great beer expert, but mainly because I am a beer fan and I love to talk about beer.  When Nando said "you have to try this", I said "ok, but let me finish my Torpedo first."

Little did I know that when I finished the last sip of the Torpedo, that the first sip of the next beer would be as close as I have seen to my favorite Torpedo.  Lagunitas has always had a strong set of beers and their quality is outstanding, I've never had a bad one.  But when I tipped back the Maximus, the hoppy goodness just kept flowing out.

It has a strong, hoppy taste that is just the right balance of bite and flavor.  Even as I started to get down the bottle, and it became a little warmer, it was still just as flavorful and easy to put down.

With an ABV of somewhere north of 8%, it packs a good punch without being overpowering like some of the double IPAs that are out on the market.  If you love the hops, this is definitely one for your short list.