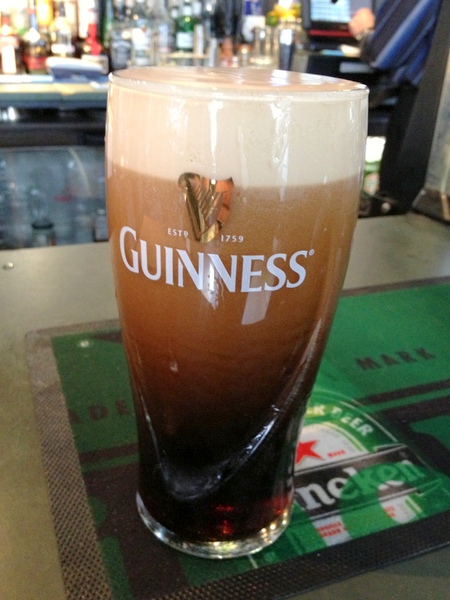 Similar to: This IS the ultimate comparison point for all stouts

So, you are probably asking yourself, "why Guinness"?  Is this some kind of weird test?

The reality is that if you like stout, you have had a Guinness; it's like saying (gasp) "I like light beer" but have never put a Miller Lite down your gullet.

Think of this as a cautionary tale.  Many have had Guinness, but most have not truly had a Guinness.  You see (as legend goes), the Guinness that you get here is not as good as you get in Ireland or England.  Now, as a person who has had a lot of it here and a lot of it there, I tend to agree with those that say the best stuff is overseas.

However, that being said, there is a big difference.  I put it down to two possible factors:

First I believe that the overseas product is fresher because it is closer to the source.  Probably true.

Secondly, I believe that they know how to pour it over there.  Realistically, when is the last time you had a Guinness?  8 times out of 10, it is a 22 year old bartender who is pissed that you ordered something that requires them to think. There is a passion in UK and Irish bartenders with the Guinness - most of the time they will draw out a shamrock in the head. That is how you know you are getting a good pour.

So, if you like Guinness (or stout) you owe it to yourself to really try the real thing.  And if you can't make it over there, try one here, they're still good.