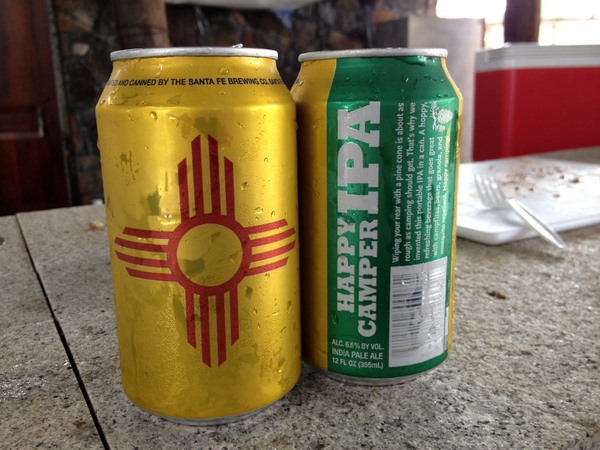 The first time that I had this was at an R&I.  I believe that the guy who runs the brewery is also a mountain biker and that he came to an R&I last year.  That may just be biking legend, but if he is a biker, then he understands what we like - and delivers.

Happy Camper is a nice blend of hops to give you an IPA that falls a bit north of Sierra Nevada Pale Ale and still south of their heavily hopped Torpedo. If I had to pick a word to describe it, I would choose one that is rarely associated with IPAs: smooth.  It has a nice flavor and would be a good "gateway beer" for your non-IPA friends that are interested in learning what all this hoppy beer is really about.

It is only availble in cans, which makes it a good addition for outdoor activities - lighter to carry, yet still full of flavor.

My first run-in with the beer was right after a really hoppy Victory Hop Devil, so the taste was a bit muted.  The most recent outing had me drinking this beer right after 12 miles at RPR and I found it to be a crisper, tastier beer. I haven't seen anything else from Santa Fe Brewing showing up in Austin, but the Happy Camper is regularly stocked at most of the better shops here in the city and I have even come across it at some of the smaller outlets as well.