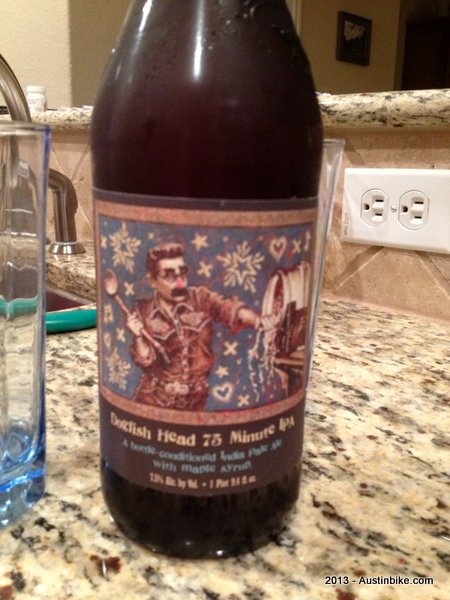 Location: Bought from whole foods and consumed at home

Single men rejoice!!!  An IPA for the people afraid of commitment.  It's not a 60 minute, and not a 90 minute, but alcohol wise, right in between at 7.5%  I love all the Dogfish IPA's, as they have a very distinct hop flavor from beginning to end, that goes down very easy.  But this beer is different.

Thanks for asking.  My favorite IPA's are the more sweet ones, and they gain their sweetness though the amount and variety of malts used, but his beer gets it's sweetness from maple syrup, which is very evident in the finish of the beer.  Think Lagunitas Brown Shugga with more hops.   The beer tastes like a typical Dogfish IPA, until the hops wear off, and then you want pancakes.  The sweet taste at the end is sugary, but not like molasses, and a little more mellow.  It's a good beer in small portions, as I really couldn't see myself drinking more that two of these.  I guess that's why it comes in bomber bottles.  Rest assured, you just gained a couple pounds and now you need a nap.  Sleep well.