Texas is known for its hot summers and this year was no exception. To ride here, you need hydration, but what do you get? I've been a fan of Camelbaks for years, but when REI had a sale on Osprey at the same time that I was looking for a new pack, I thought this was the time to make a switch. Or was it?

To begin with, I need 100 ounces, nothing else will do. I'd rather come home in the winter with extra water than have a dry bladder on a hot day. Additionally I need a lot of room for tools, parts and other stuff. Yes, I'm the guy that always has that thing you need. Once it even included a new derailleur (don't ask). Both packs fit this, each had their strong points and their annoyances. For years, CamelBak has had the market to themselves, and now they are getting real competition from Osprey. Osprey brought new innovation and for the first time, CamelBak has really had to step up their game. There were more innovations, this generation over the last, than I have ever seen.

Either will be a great addition to your rides, but I got picky and here's my analysis: 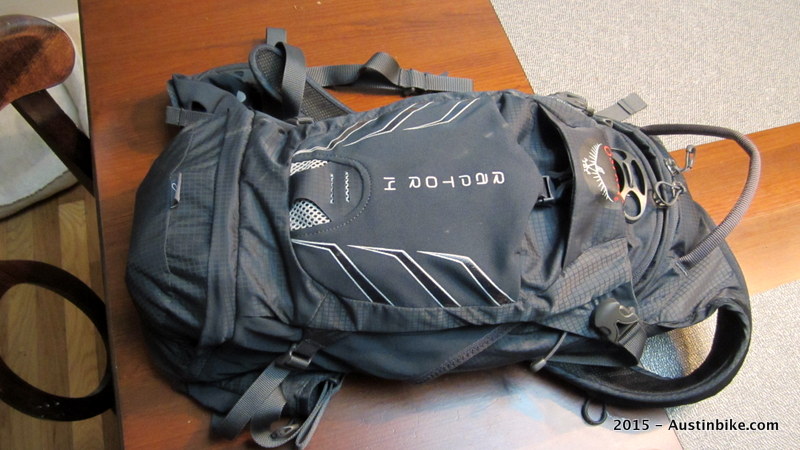 The Raptor was the pack I wanted to love. People raved about the bladder and how easy it was to fill because of the handle. However, I found two immediate problems with this design. 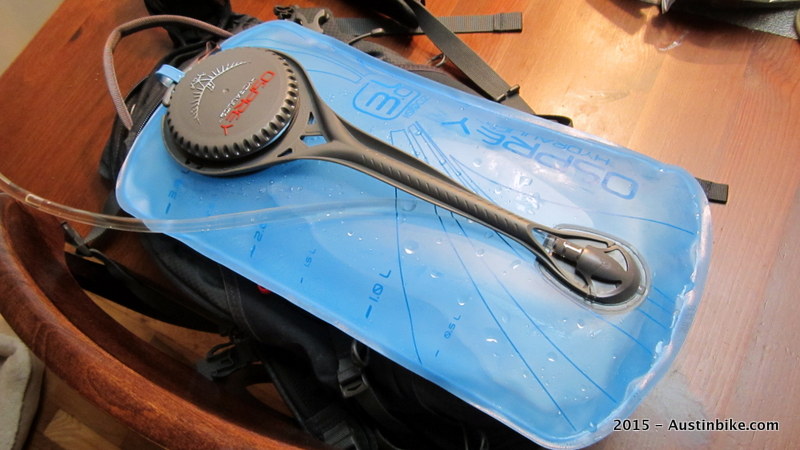 Then, to make matters worse, when I tried to fill the bladder, the fill cap basically did not allow me to easily fill it like the old CamelBak did: 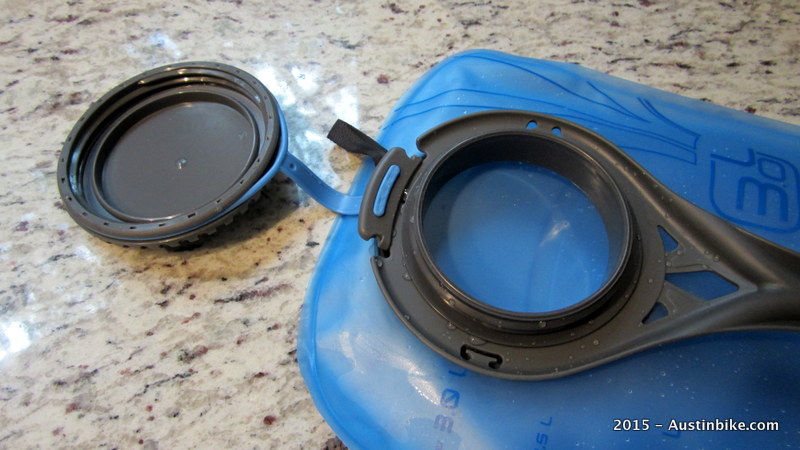 In a poor design decision, the cap is attached at the top, which means that if you try to fill it vertically, it continually gets in the way.

The top pocket was padded and insulated so your phone stays safe. One of the things I hate is in the summer a phone can get cold from a really icy pack. 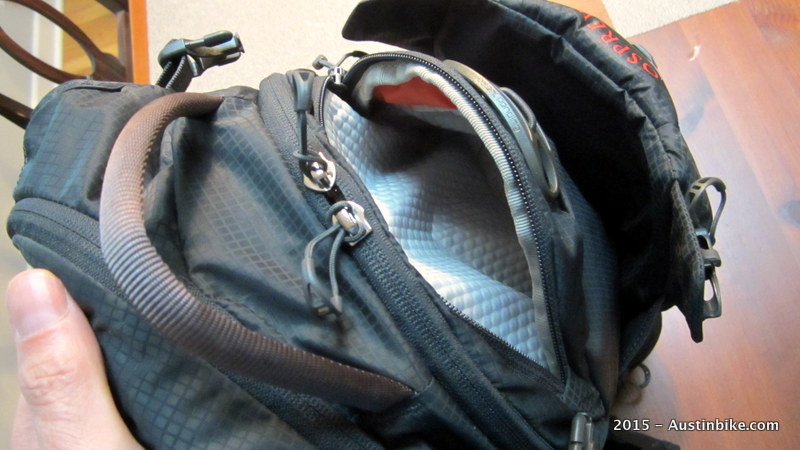 I liked the side pocket on the waist strap and that would have been great for a phone, but the inner side is mesh, not fabric, so your phone face gets all wet from sweat.  You could remedy that by flipping your phone over with the scree pointing out.  And then when you fall....

I did not like the key clip. It seemed easy to put your keys on with one hand, but after the ride I found the keys had fallen off the loop and were loose in the pocket.  Not good. 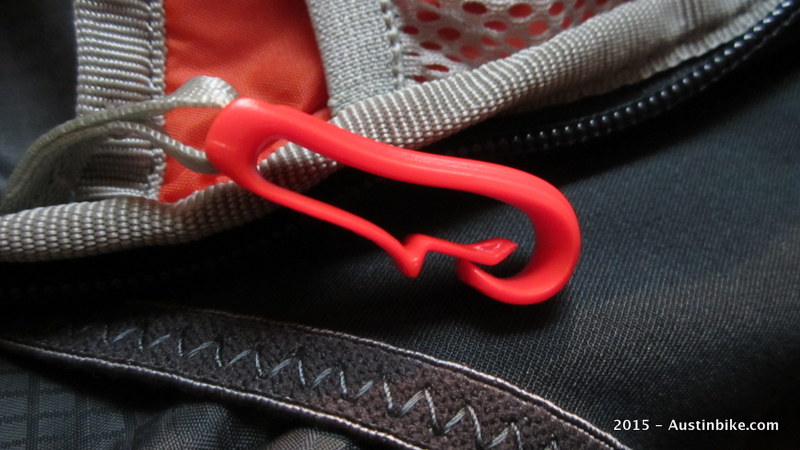 The best part of the pack, hands down, was the tool pack at the bottom. Unfortunately with all of my tools it would not close properly, but for 95% of the riders, this would be perfect.  I really liked that feature. 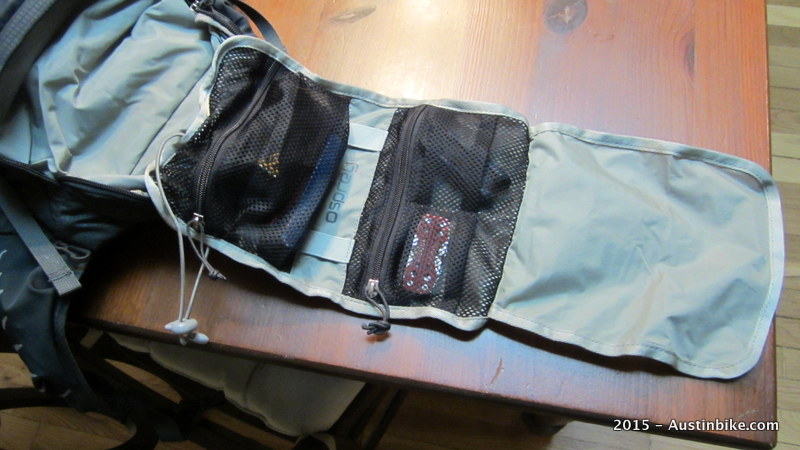 The Mule is similar to the Osprey in many ways, but carries with it some of the great features from the earlier models. 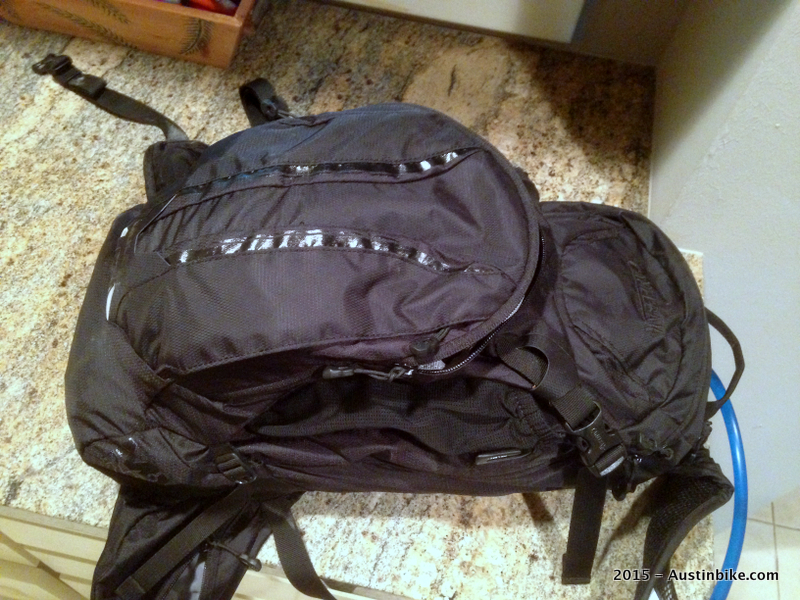 The Mule does a better job of matching the contour of my back, relative to the Osprey; the flexible bladder has a lot to do with that.

They have changed from the older design to now add some standoffs that prevent the pack from sitting directly on your back. Now it has a few pressure points and is flexible, but this is only vaguely better than the flat-feeling Osprey. 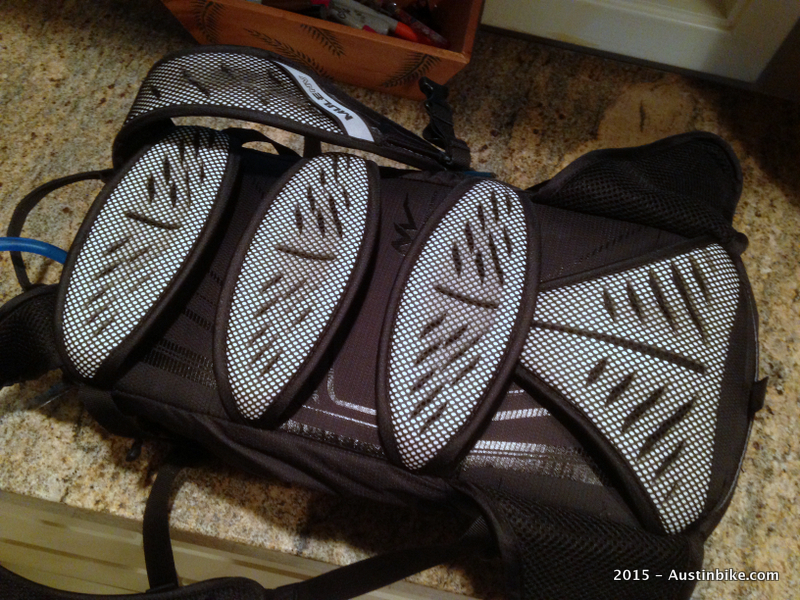 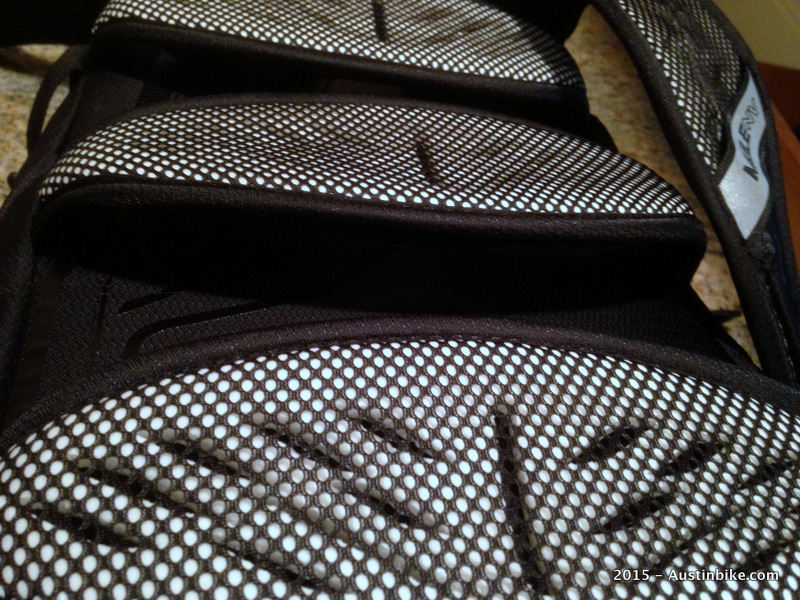 After dealing with the Osprey filler cap, I was happy to be back with a CamelBak lid that has a 1/4 turn to open and a flexible attachment that can be moved anywhere you want in order to easily fill the pack with water and ice. 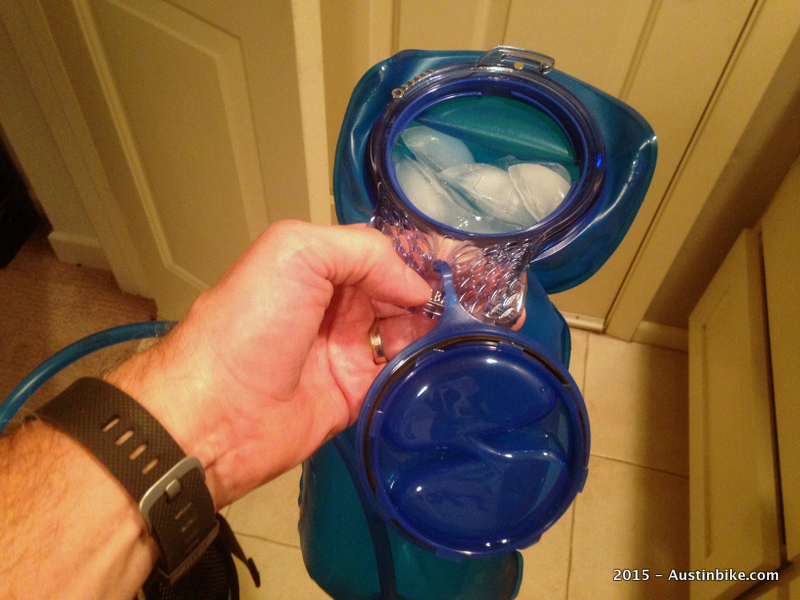 Another thing that makes the Mule great is the quick release, which allows you to keep the pack in the garage and just bring the bladder inside the house to fill.  You can also fill a bladder and keep it in the fridge so your water is already cold. 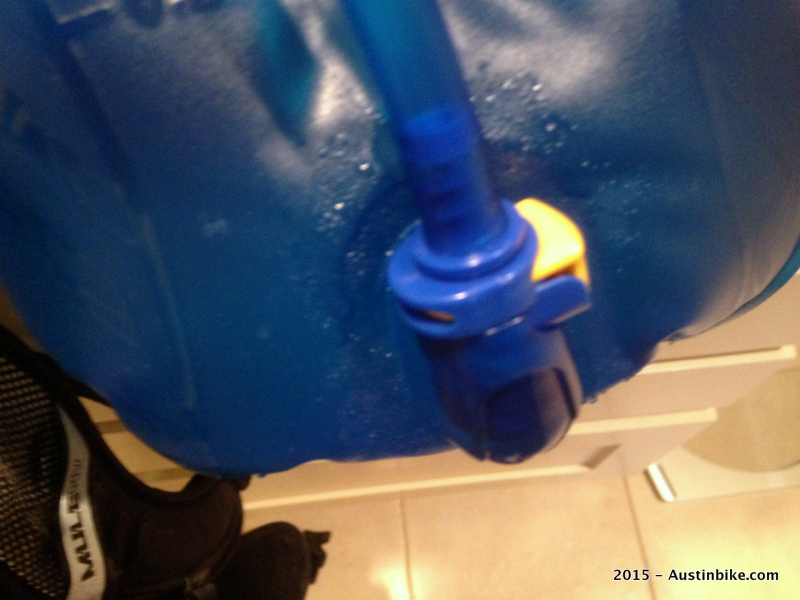 The key latch is much sturdier and after many rides I have never had keys come off of the clip.

I wish it had a tool pouch at the bottom, unfortunately that is not included. CamelBak does sell a roll up tool pouch, but it is both expensive and an upsell. Instead, the bottom of the pack includes a rain cover that can be pulled out in case of a storm. We rarely need that here in Texas, but I actually used it for the first time today. 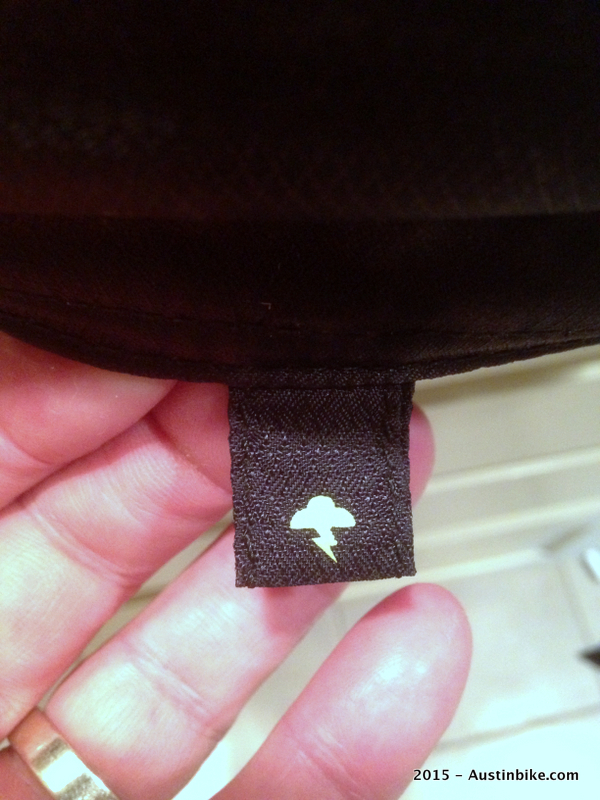 The side pocket is better and it has covering, not just mesh, so a phone stays dry.  That is the good news. The bad news, however, is that it is small. My iPhone 5 just fit, but when I upgraded to the 6s (not the plus) it would not fit. 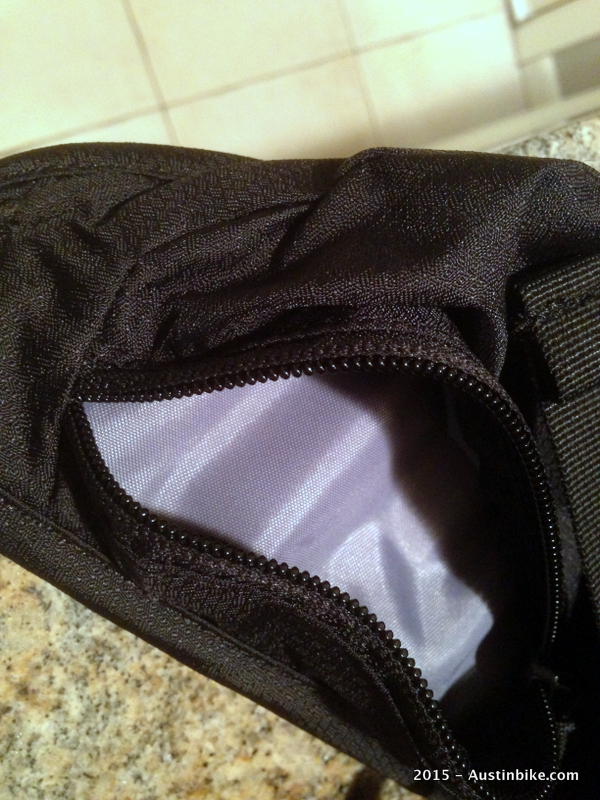 Ultimately you can't go wrong with either. I found the Osprey to be too much of a tradeoff. I wanted to love it, but I only liked it. I ended up swapping it out for the CamelBak. The CamelBak is not without it's flaws and some things, like the new ventilation, are more annoying and should not have been changed. But overall I have grown to love the thing, flaws and all, and I will continue to use their products in the future.

However, the gauntlet has definitely been thrown down, and the next pack will not be a slam-dunk decision for CamelBak.  I may be more inclined to go with Osprey if CamelBak does not continue to innovate.