I'm a big fan of interesting multi-tools. There is a huge selection of them, most gravitating around the idea of multiple hex keys in a fold-out chassis. But, as I learned with my Crank Brothers tool, some of the linkage bolts on my full suspension bike were not accessible due to the short ken key length and the size of the tool's width. So I ordered a Blackburn Big Switch that takes a unique approach to the multi-tool market with a T-shaped tool that gives some significant extra leverage.

The tool itself gives you not only a selection of hex keys but also Torx drivers and even a chain tool. For the most part this is a one-stop shop for trailside repairs. It may lack a few tools of some of the larger offerings, but has just enough for the typical repair or adjustment. 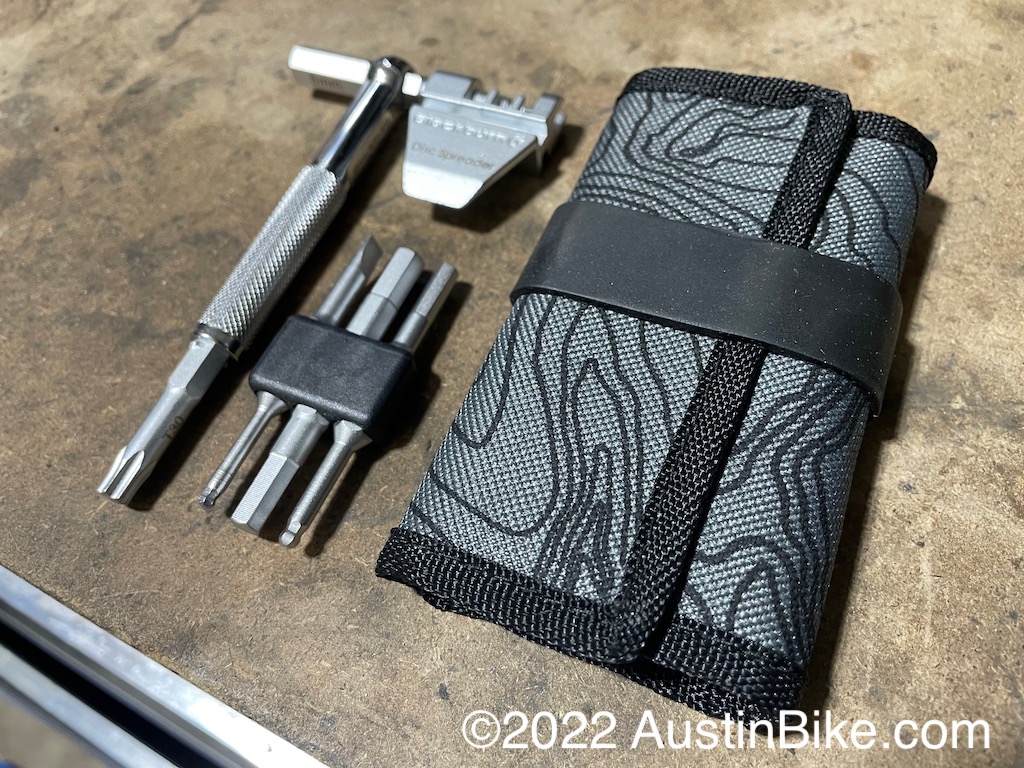 The tool consists of 5 double-ended bits, a handle to complete the T, and a carrying pouch. The bits even include an 8MM bit for those that need to remove or adjust pedals. The handle should *generally* give you enough leverage to take pedals off. 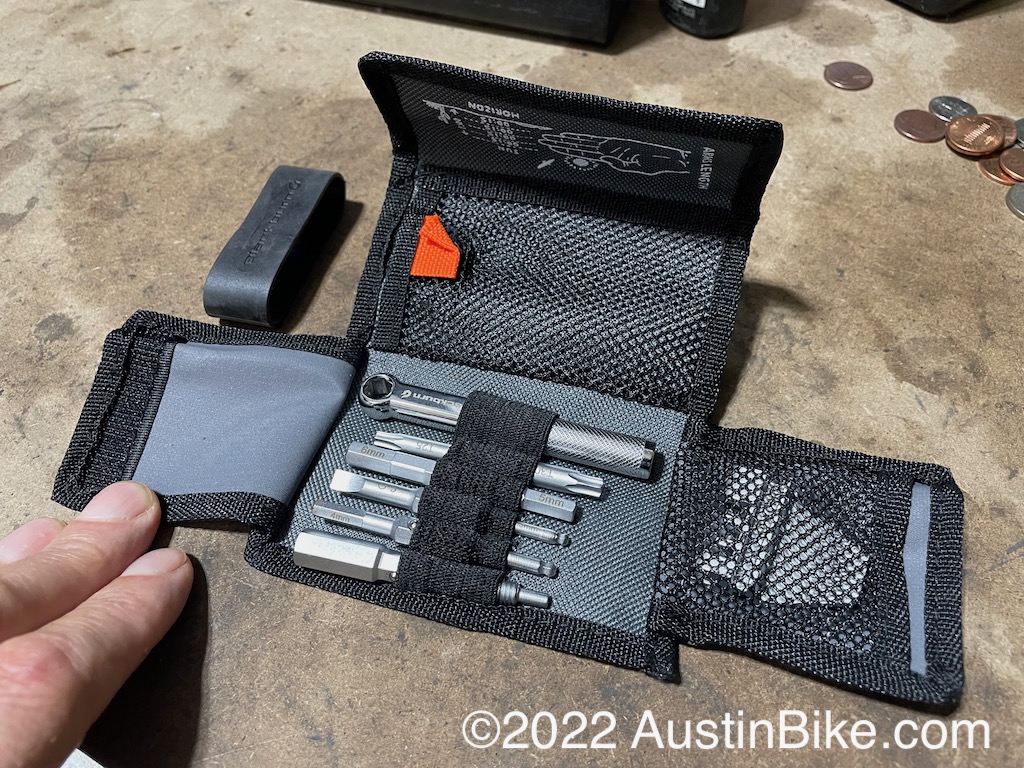 The wallet not only protects the tools, but also includes a mesh pocket for cash, a driver's license, or other small tools to accompany the Big Switch. 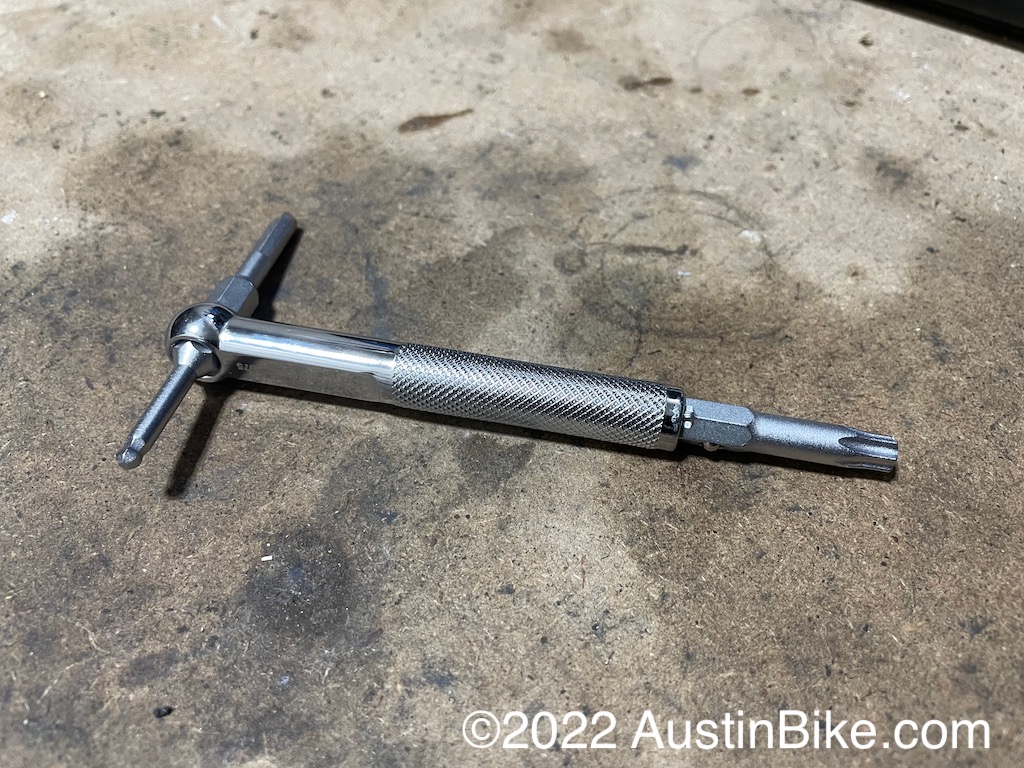 By teaming up the appropriate bit with the handle, you get a great tool with plenty of leverage for handling any trailside repair. 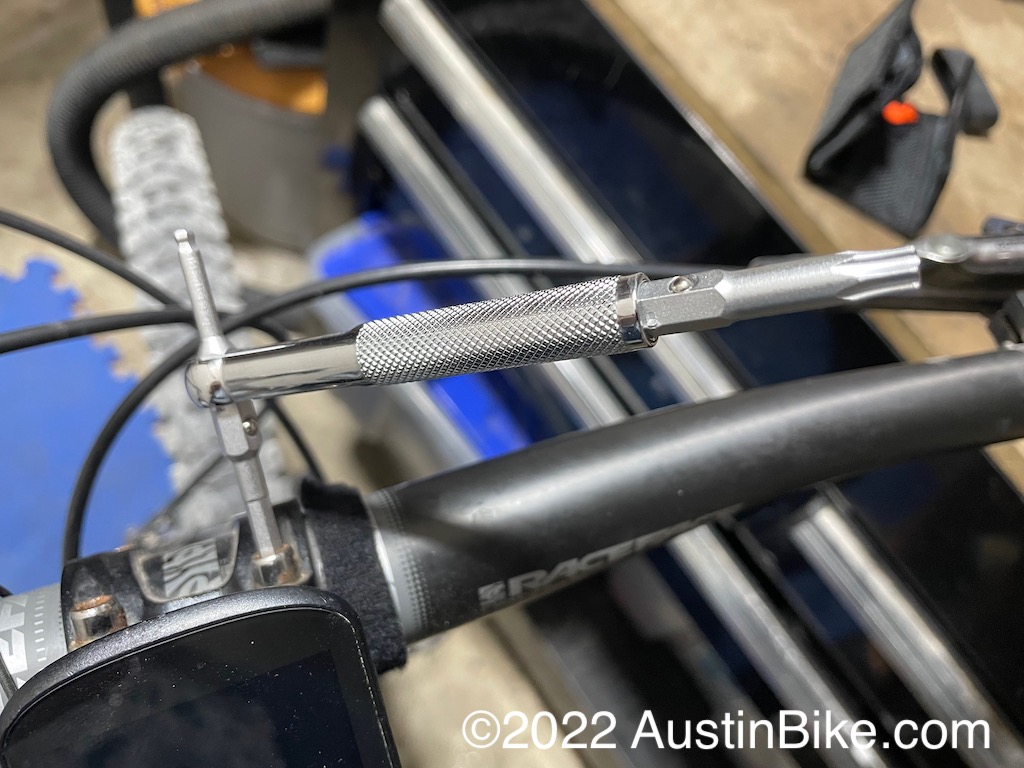 Each of the double-ended bits have two positions for insertion into the handle. There is a ball bearing that allows the bit to snap into place, holding it tight while you are doing your repair. You don't have to worry about the bit dropping out mid repair or trying to find it in the grass if it is dropped. 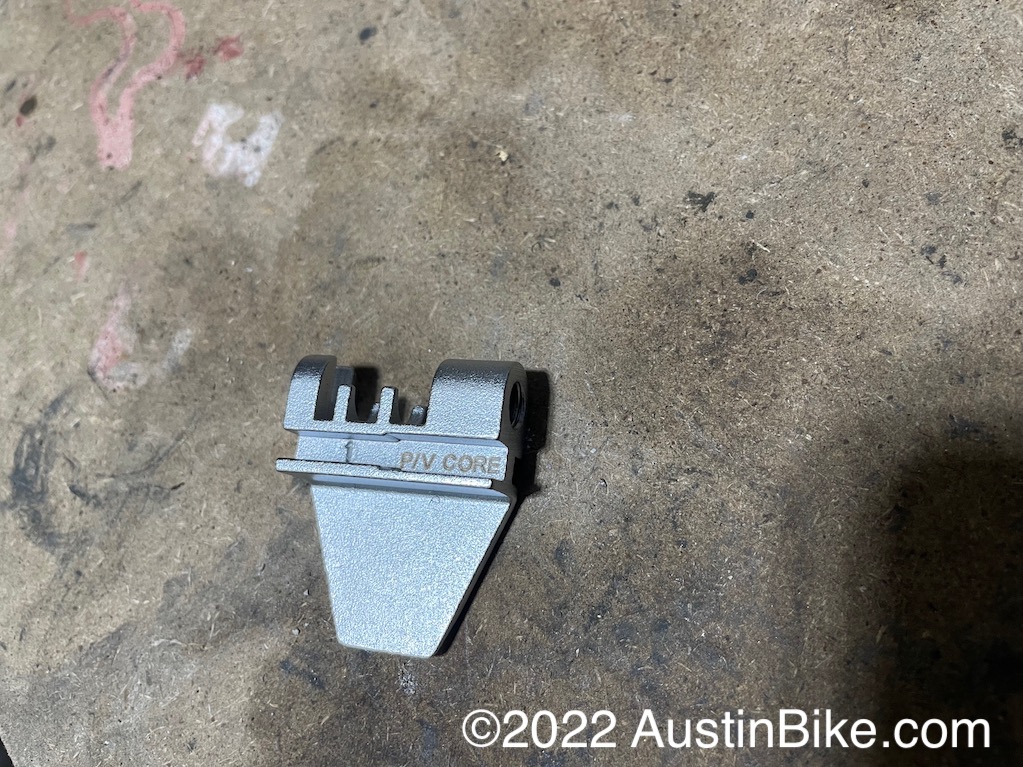 The included chain tool also includes a couple of nice additions. The first (above) is the Presta valve core removal tool, which is important if you have a tubeless setup and want to add some sealant trailside. I don't carry a bottle of sealant with me but I seem to ride with a lot of people who do. The second feature on the chain repair tool is (below) the disk break spreader. This is great for this times when you accidentally grab the brake lever during a wheel/tire repair. We've all done it. 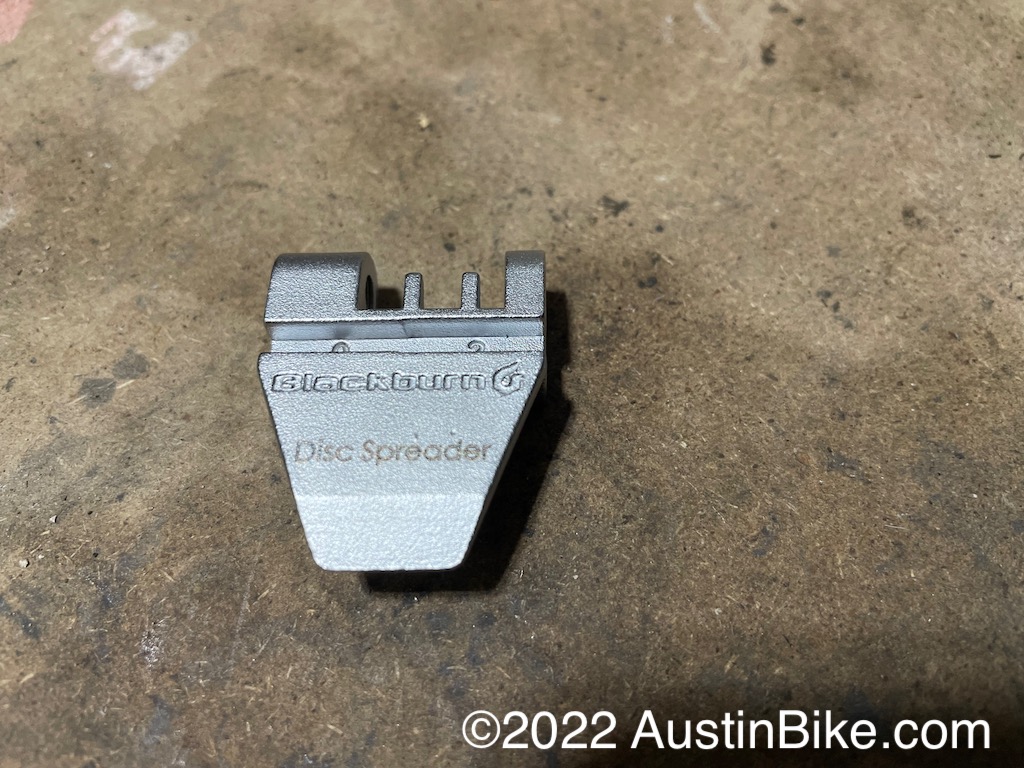 The Big Switch has all of the most popular tools for the typical bike, but it may not be as exhaustive so it is important to think through all of the tools that you use before jumping in.

One of the nice things about this tool is that the wallet gives it protection: 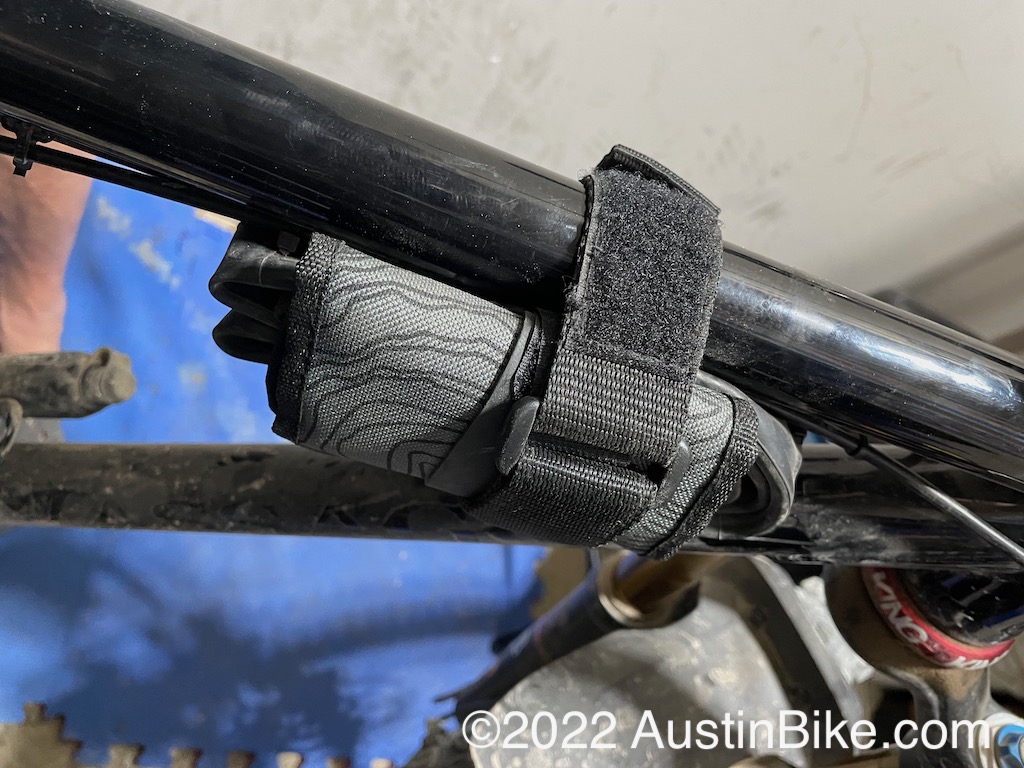 While I bought this for my full suspension bike, I ended up pairing it with my singlespeed because the Granite strap that I use to hold a spare tube on the frame was a great compliment to the Big Switch. The rubber of the tube helps hold it in place and there is zero concern that it is going to drop off or get lost.

The only downside that I have found so far is that with this configuration, it's a bit harder to just stop, pull out the tool, and make a quick adjustment. If I were doing a shakedown ride on a new bike or after a new component was installed, I'd probably prefer a simple folding tool, but for the long term use on a bike that is all dialed in, the Big Switch is a nice complement to any bike.