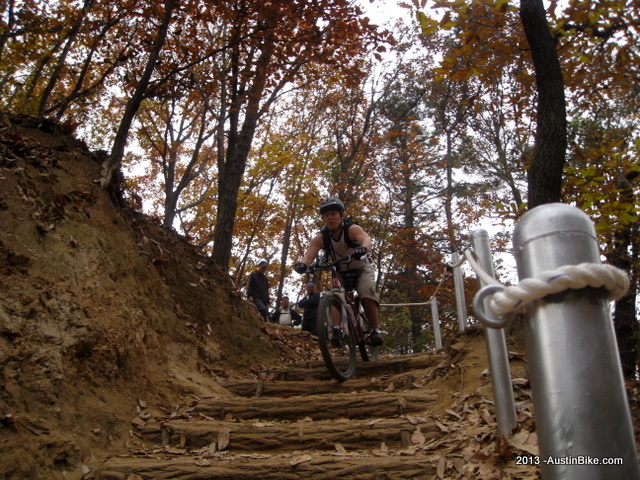 Sinwolsan is to the west of Seoul, between Seoul and Incheon. Of all of the places in Seoul, it is the one with the least amount of climbing, but as you can see, an easy climb in Korea is a tough climb for Austin. There were quite a few climbs that I was surprised to make and many that I could not finish. The good news is that climbing puts you at the top so you can take advantage of the downhill portions.

Location: Outside of Bucheon, south of Seoul.

Directions: (From the Filthy Freeriders site): The easiest way to get to Sinwolsan is via the Han and Anyang river bikepaths. Ride west on the southern side of the Han river until you get to Anyangcheon (Cheon means stream or small river in Korean). Follow Anyang stream south until you reach Omokgyo bridge. Leave the canal path to ride past the large sports stadium along the roads in a westward direction for approx. 2km until you see the low ridgeline in front of you. Seoul has no street names, certainly none that are posted so general direction is all we can give you. (Alternatively, if can't understand this but can find the West Seoul Truck Terminal on a map somewhere, the riding area is immediately west and south of it.)

Technical Level: Medium to high. There are a few technical sections that I walked. The aerobic workout is pretty good with the climbing. This is a country of mountains.

Length: I don't know for sure. I clocked ~20KM and we only sampled a small piece of the mountain.
Trails: Mainly dirt with few rocks. Lots of leaves (it was fall) and plenty of roots.
Trail Map: Trail Map
Elevation: