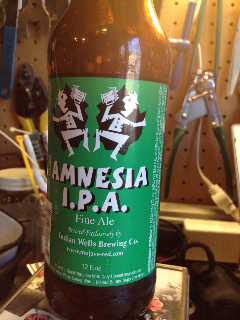 Location: In my little shop after building a wheelset

Similar to: Nothing, I hope

Fantastic name, because I'd really like to forget this beer. Actually, that's not true: I need to remember to never let this insipid ale pass my lips again.

I'm a hop head, and I drink lots of hoppy beers, and I was pretty excited about this one that was given to me by a buddy recently. But I was quickly disappointed. Though it looks good in a glass with its deep orange hue right in the middle of the IPA color scale, the aroma gives me almost nothing. It's akin to smelling a sheet of paper.

Undaunted and anticipating a delicious surprise I soldiered on and took a swig of this bad boy. The flavor is characterized by an astringent chemical taste and mouth-feel that settles in the cardboard range. It's not something that will slake a thirst, rather you hope that there's something else in the cooler to take it's place. I would describe the body as medium to light for an IPA. It gives up none of that green fresh-hop flavor that some of my favorites do. Succumbing to a sudden case of the dropsies would be a good way to finish this beer off.

Take a good long look at that label, commit it to memory, and just don't go there. You've worked too hard for your reward to suffer through something like this beer. Hoppy trails!

Rating: 2 out of 10 (only because it's beer, and that's worth something)