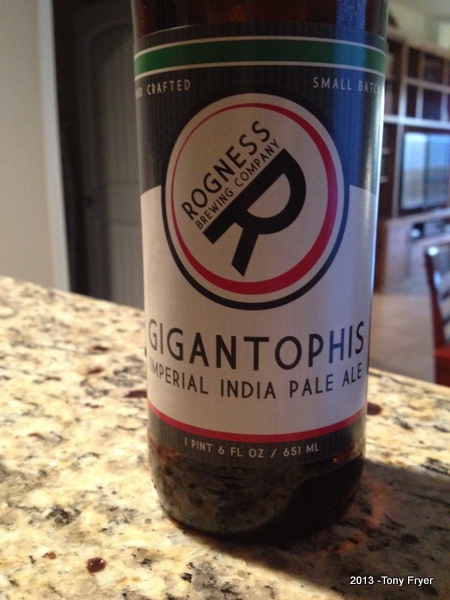 Location: Bought from local convenience store and consumed at home

Hooray for local beer!  Rogness is based out of Pflugerville somewhere and does some pretty fine beers actually.  This here Imperial IPA is one of them.  First of all, drink this sucker really, really cold, as even if you let it sit out for just a little bit, the taste starts to change and the bitter becomes more evident.

This beer has a good malt sweetness to it, which I enjoy, and a big, bitter hop finish, which is expected, with a piney taste, which you think would taste awful, right?  I mean, if I told someone that I like a beer with a "pine" finish, they might think I was talking about furniture.  A little after it settles in, the booze becomes evident.

This beer clocks in at 9% and 103 IBU, so it's not screwing around.  It's kinda like doing a wind sprint to get warmed up for a ride.  I will say though, that this beer goes down surprisingly easy for such a gigantic beast, so I got that going for me, and one glass is enough, because another would wreck my pallate for the rest of the night.