Riding in summers here in Texas can be a bit daunting for many.  As we enter the first week of temperatures in the 100's I have been thinking a lot about how to keep water cold for the duration of the ride.  A thread on BikeMojo yielded a great idea from Bamwa that I was able to fine tune into a really nice and simple mechanism for keeping water cold during the ride.  So far, on the 3-4 rides that I have taken, after even 4 hours the water is still cold with this simple hydration pack modification.

The challenge that we all face is that once you fill a pack with ice and start riding, it immediately starts to melt. There have been all kinds of methods for making larger cubes of ice, freezing bladders, but let's face it, we all want a simple solution that does not take up too much room in the pack.  Bamwa created an insulated sleeve for his pack and while this is probably a superior solution, for those without a lot of room, creating a sleeve is just going to cut down on the amount of water that you can ultimately hold.  My modification, while it is not as thermally efficient, still delivers 99% of the benefit with minimal room consumed in the pack.  My theory is that the area between your pack and your body is already somewhat insulated, so this is of little concern; the real issue is the other side, between the bladder and the rest of the pack. That is where the biggest heat exposure is coming from.

To begin with, I used some leftover insulation that I bought at Lowes for another household project; this was a roll of Reflectix double insulation.  I then cut a slice of the insulation out and basically shaped it to the size of the Camelbak bladder cavity: 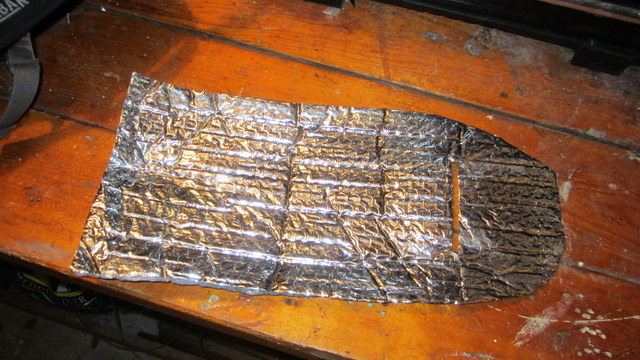 The Camelbak model that I have has a large plastic lip around the filling hole that is designed to fit into a holder in the pack in order to keep the bladder from getting bunched up at the bottom of the pack. This feature helps make sure that you don't prematurely "run dry" by keeping the shape and not allowing a collapsed bladder from cutting off the flow.  I simply lined up the insulation inside the pack and used a pair of scissors to cut out a slot.  Initially I was thinking that I could then feed the lip through to the holder, but I find that the insulation is strong enough to hold the bladder up just by slipping the lip into the insulation slot: 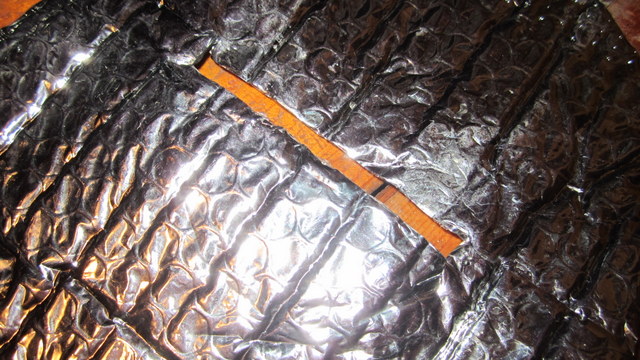 With the insulation all set it was easy to take the next step: testing.  Normally I was filling a Camelbak all the way to the top with ice for a ride and then pouring in cold water from the fridge.  I am guessing that this was roughly 10 scoops with our ice scoop to fill the bladder.  This would normally stay cool for about 2 hours (~75% of the ride), and by the time it was starting to warm up I was desperate enough for water that I didn't care that it was getting warmer at that point. There would never be any ice in the pack at that point.

With the insulation in place, I put only 5 scoops of ice into the bladder, then filled the rest up with cold water at roughly 10:45AM (well after the temperature had started to rise.  I then rode 2.5 hours in the sun. The last sip at the car was still very cold.  Then I came home, hung the Camelbak in a hot garage and went inside for a few hours.  At 4:00PM, more than 5 hours since I had put the ice and cold water in I went back to the garage.  Opening up the Camelbak yielded cold water, and there were still some small ice cubes remaining in the water.

While the biggest benefit of the solution is the fact that I now have cold water for the duration of the ride, there is one more nice side effect.  On a weekend, when you are filling a hydration pack and filling a cooler with beer, you don't end up using up all of the ice in the freezer.  Normally by the time I filled up on a Sunday the ice try was completely empty, so this insulator can probably bring a bit of domestic peace to the house as well.

I received a recommendation for creating a "pouch" that would cover both sides of the bladder, not just one. For some this will work better, but there are two challenges. The first is ice melting. I tried to do a two sided insulator and found that the ice did not melt enough. I ended up with a bunch of ice on a ride after I drank the water - not optimal. The other challenge is the room in the pack, with a pouch it is harder to zip the pack back up (or you can't fill it as full.) Every pack is different, so you may want to experiment on what works best for you.