I have been a longtime user of Camelbak, having owned many different models over the years. A few years back I strayed and went with an Osprey based on the rave reviews from others I ride with, but I quickly realized the shortcomings and landed back on the Camelbak bandwagon. But things have changed; I am now firmly in the Osprey camp after using the new Raptor 10 for a while.

I ended up buying the Osprey because a local shop was going out of business and everything was 30% off. I was not really in the market as my beat up and ripped Camelbak Mule was still functional, but when I saw the Osprey I decided to take a closer look. I'll be honest, based on Camelbak's corporate owner I had already vowed not to send them more money, so this was an opportunity to put my money where my mouth was. 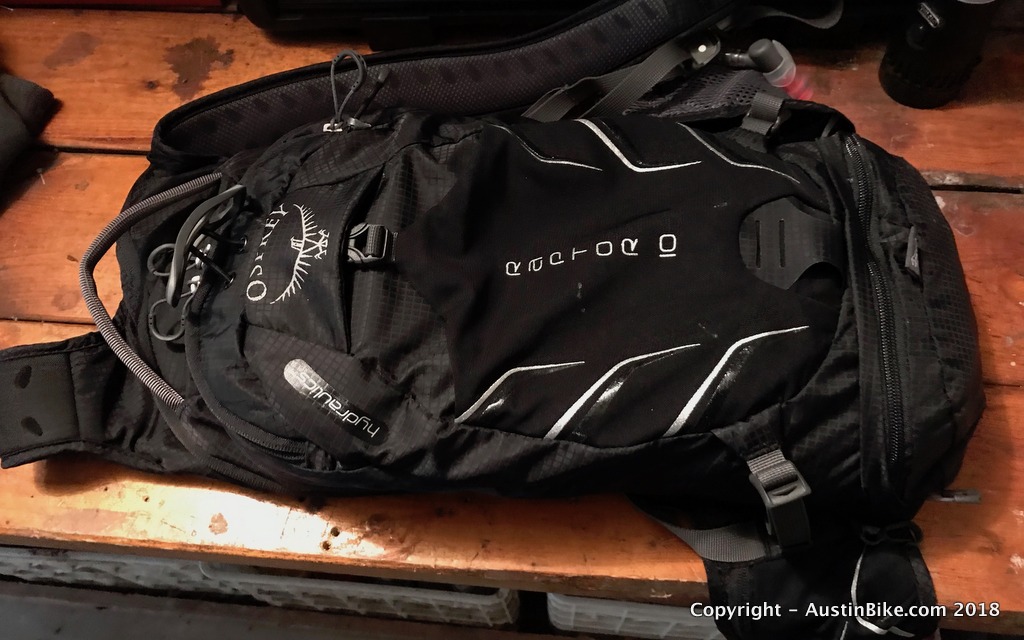 The biggest reason that I returned the Osprey years ago was the bladder. It was designed with a hard plastic flat back that some misguided person believed would allow it to be easier to fill, but in reality this flat plastic "board" on my back made the whole pack uncomfortable. two or three rides was all it took for me to realize that it would not work for me.

As you can see, they have changed the bladder greatly. This is now a flexible bladder, just like the Camelbak, so it is far more comfortable. As a matter of fact, I would go out on a limb and say that this is the most comfortable pack that I have ever worn. It sits a little lower than the Camelbak and is better shaped to my body (your actual mileage may vary on this one, but I was pleasantly surprised at the comfort after my first few rides - even when packed with 3 liters of water. 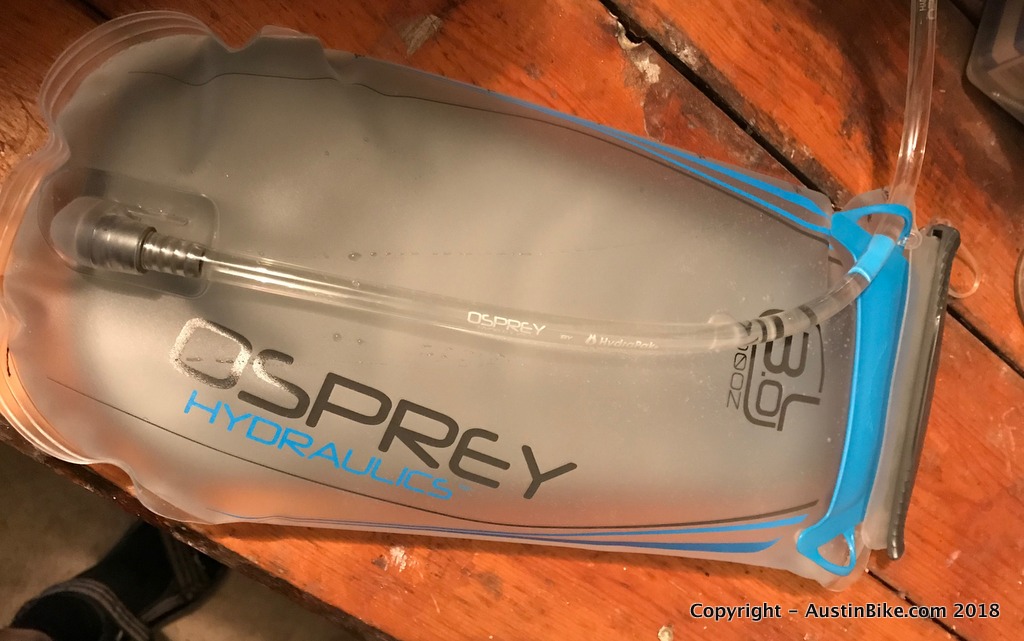 The fill opening is a little different. In the past there was a large round plastic lid that screwed off, similar to the Camelbak, but that lid was attached to the rest of the pack in a very awkward manner, meaning that I got in the way every time I tried to fill it. Now, the closure is maintained by sliding clip. The first time I tried to fill it, the closure was a little awkward, but after a few tries I am now a lot better at it and it is 100% leakproof, unlike the Camelbak that can leak if the rubber o-ring comes out of the channel. 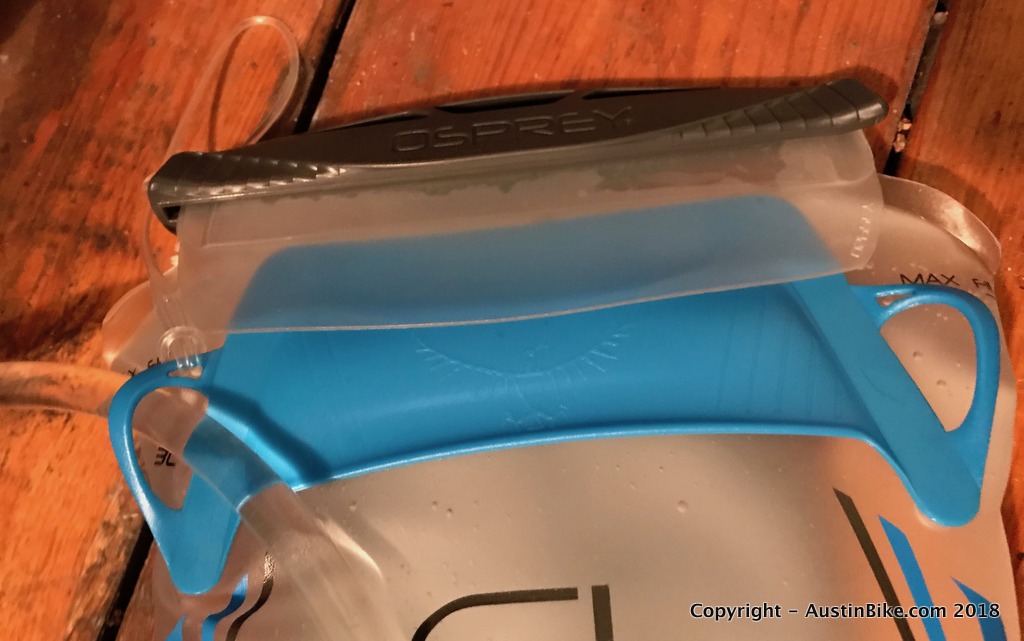 I am not a fan of the bite valve that has a hard piece of plastic in the middle of it. This feels a bit awkward, but I guess I will get used to it eventually. Everyone seems to rave about the magnet that attaches the valve to the chest strap, I'm indifferent to that. It is better than Camelbak (their magnet attachment will come loose, off of the tube) but I never had problems getting to water while riding. 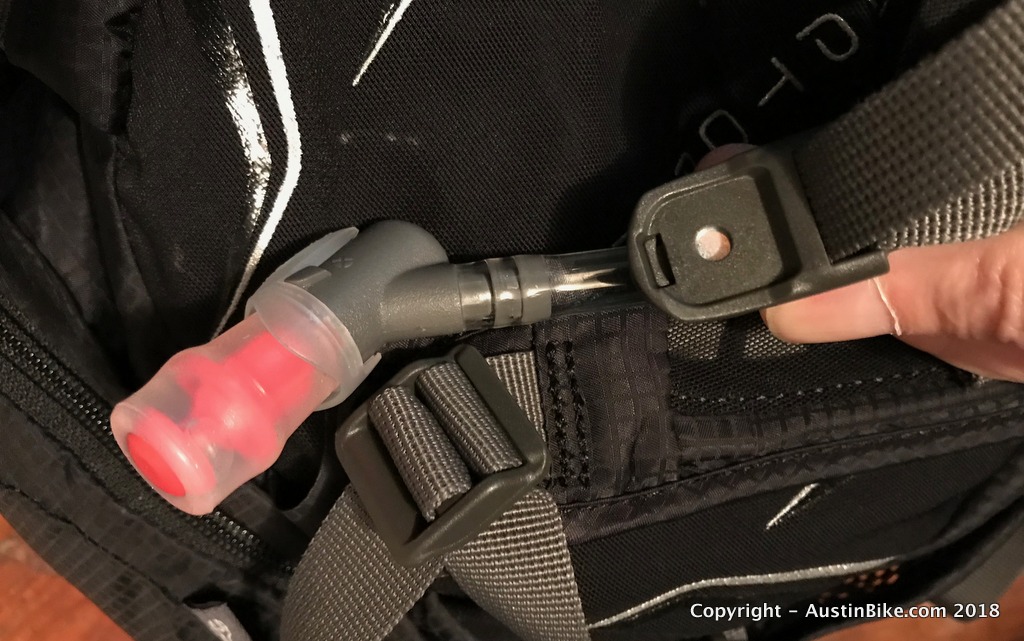 Oddly, the hydration tube runs up the strap and is covered by fabric and a really long zipper. Seems like a more needless feature. One thing that is missing is a quick connect that would allow for filling the pack by only removing the bladder. They are an additional $10 (I have one on order) because otherwise filling it means either dragging your pack tube and bladder into the house or disconnecting the tube from the pack - both are equally a pain. 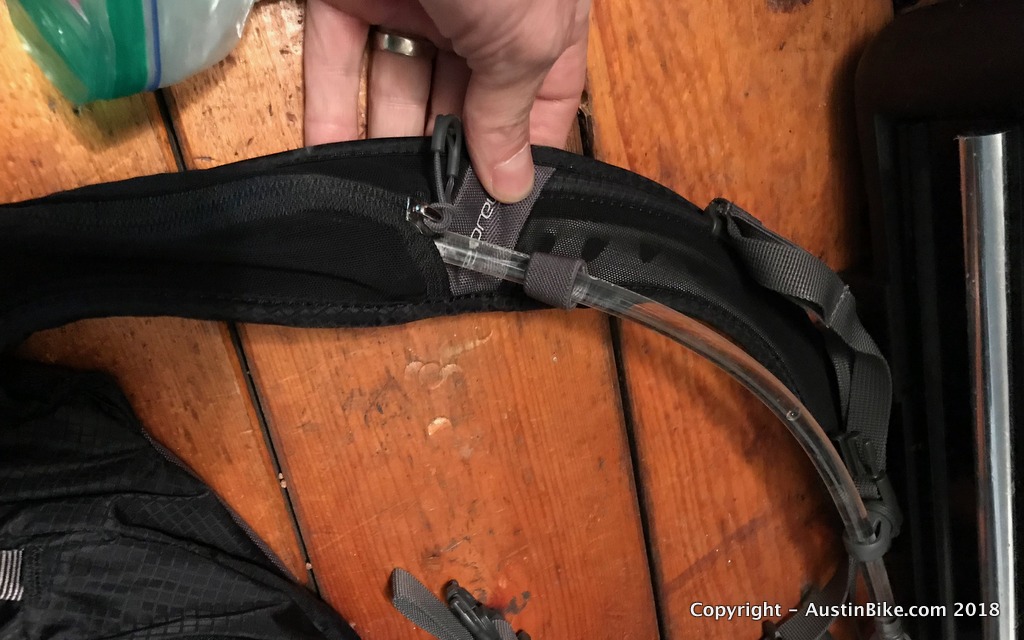 The key pocket has a key clip that is RED. This stands out and is easy to find relative to the competition's black clip. Additionally it has a separate pocket for the keys so even if you are opening and closing the larger pocket (where the phone typically goes) you are not likely to lose your keys on the trail. Last week someone in our group lost a phone (not in their pack) so I tend to be very careful about phones and keys as these are important articles that I do not want to lose. 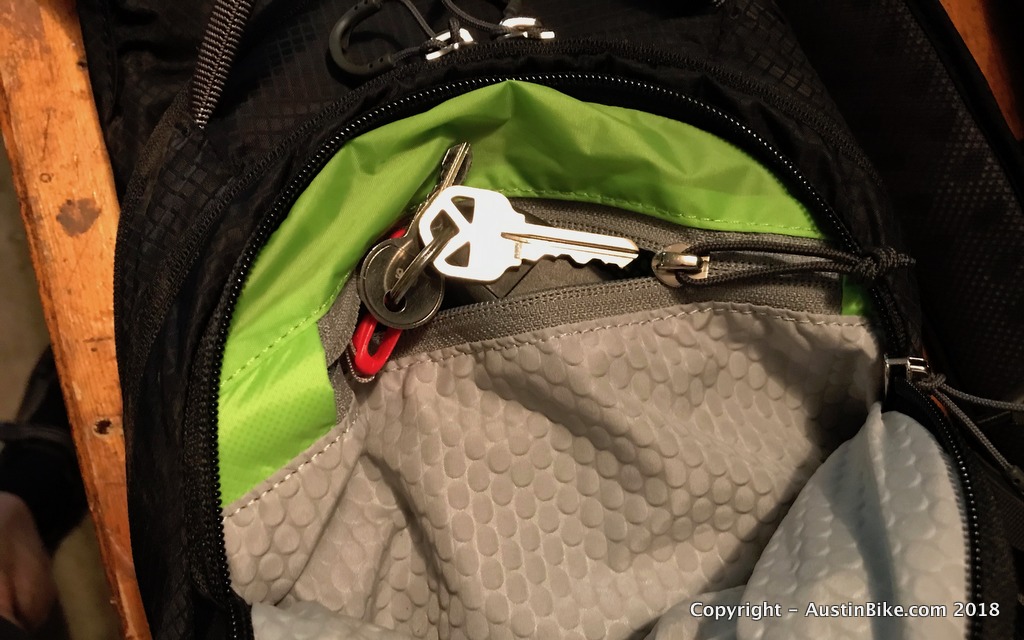 Saving the best for last - the tool roll. I absolutely LOVE the tool roll at the bottom of the pack. It maintains its own pocket with a zipper. A quick unzip and the roll unfurls so that you can get at your tools. No more digging through the different areas of a pack looking for that special tool that is always hiding too deep down in a pocket. 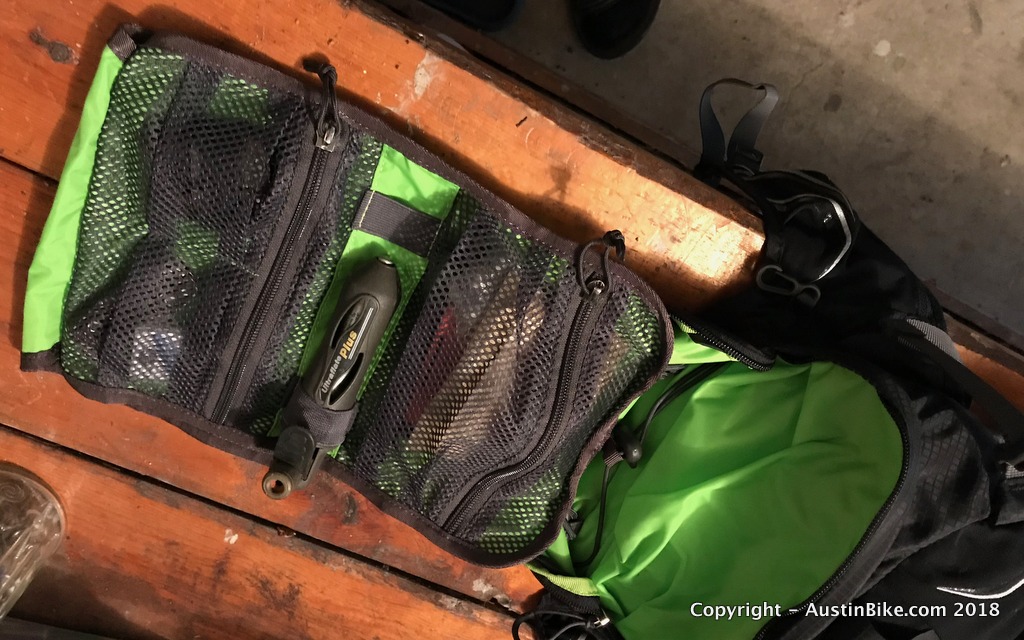 One thing I do not care for is the top loop placement. I hang my pack after every ride and it is much harder to hang by the top strap than a Camelbak. This is because the hard plastic of the bladder top makes the back stick up, making it harder to hang on a hook. 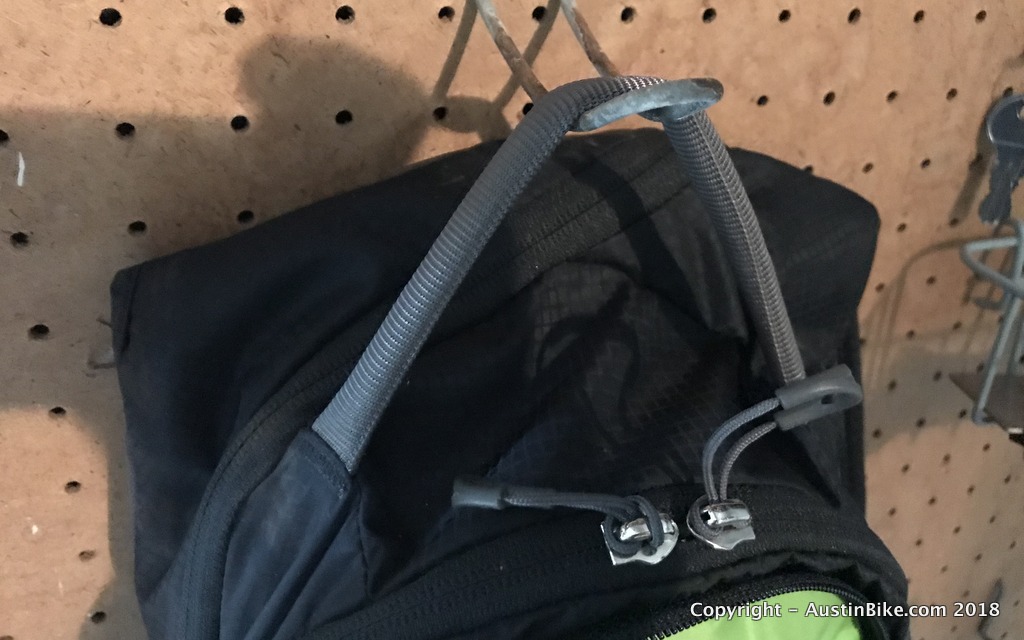 Additionally, it has two zippered pockets on the lower waist strap vs. the single pocket for the Camelbak. These are nice, but the backs are mesh, not nylon, so they are more likely to let moisture in and more likely to get ripped. I wish they were a little sturdier, but I am happy that both have a zipper. Zipper pulls, by the way, are much better on this pack.

Overall I am very happy with this model vs. my old Camelbak. In retrospect I wish I had gotten the Raptor 14 which is closer in size to my MULE; essentially I have lost some pocket space. Maybe this will cause me to carry less crap, which could be a net benefit. Time will tell on that one.