As an Enchilada Buffet (EB) rider, getting to the bottom of Yaupon is miserable - partially because it's another climb (not the worst, but a climb), but at the top, Thumper awaits. People say Thumper has flow, and I never believed it. Then, this year I became a convert. I now like Thumper and you can too. It's actually getting better and it will be a lot better in this year's EB. Here's why.

Thumper is actually less than 5 miles, clocking in around 4.7 miles or so, but it always has a special place in people's heart as the killer in the EB. The best part of Thumper was always pulling out after you are done. At that point, you KNOW that you can finish the EB - another 5 or so miles of road, followed by an easy lap at Walnut Creek and then you are done. But that relief only comes after the agony of Thumper.

One of the biggest challenges was in getting lost. Signage in Thumper is better now with some hiking trails that were mapped out (red and blue) along with some additional bike signs (white) - this makes it far less likely for someone to get lost.  I did a couple of laps this past weekend and had an epiphany that the trail does actually flow, it's easier to navigate and is becoming somewhat enjoyable now.

Here's the bottom line on the new navigation: 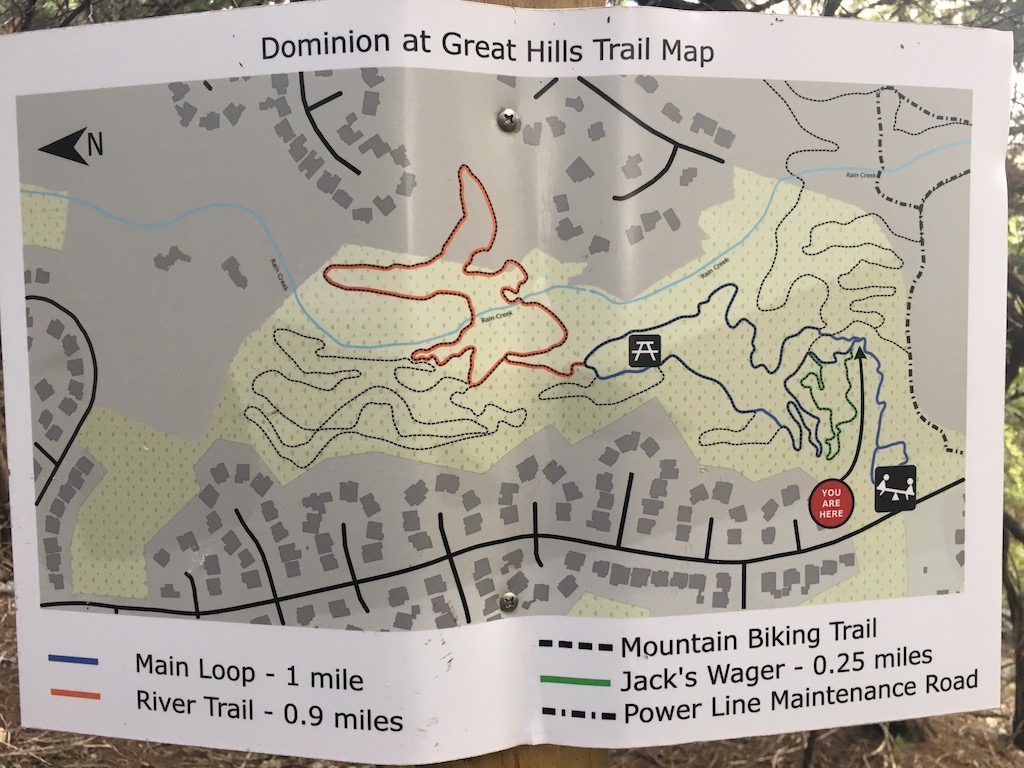 The simple rule on Thumper is:

Start on the blue. Ride that for the first .75 miles until you get to the 2-way section. Then switch to the red signs at the second 2-way sign  and then go back to blue after the 2-way is crossed a second time. The only exception is where you see a white sign, which over-rides the red and blue. So remember, White always wins, blue in the beginning, red in the middle and then blue at the end. Basically the first mile is the toughest part. Once you get past ~3 miles you can stop worrying about sign colors.

By looking at the map above, you should be able to see what is going on. The "2-way" part that they talk about is just to the left of the picnic bench icon on the left (it is in the blue).

I rode through and marked down some landmarks to help you know whether you are on the right track. Here is where you should be.

At .75 miles you'll hit the first 2-way section. Just before it there is a sharp down and then up; the turn is to the left and there are a ton of signs. Follow the white ones. You'll only go about .07 mile and then you'll see red signs; keep going forward and then eventually up to the left. Congratulations, all of the tough turns and confusing stuff is behind you. You can now relax and enjoy Thumper. At a mile you'll hit "Hammerhead Highlands", this is where the trail really begins to get some flow.

At ~1.55 miles there will be a downed tree you'll probably need to dismount to get under, so you are still on the right track, followed by some downed logs at ~1,77 miles in to the ride.

At 2 miles you'll cross the creek for the first time. and then start some climbing. You'll cross one concrete culvert, do a big switchback and cross the second one. At 2.5 miles you will come back across the creek, and as you cross over say a prayer because you are more than half done and most of the bad stuff is so far behind you. Shortly after crossing the creek you'll hit the second 2-way section (that you were on before. A sharp left, followed by a short climb and you'll find yourself back where you first encountered the 2-way world a while ago.

Another sharp left and you're now done with all of the 2-way nonsense and you can focus on the switchbacks that make up the next 1/10th of a mile, climbing back up to the top, near where you dropped in - but don't exit or you miss the good stuff.

The trail flows well from here and at 3.1 miles you'll cross the creek a 3rd time; a half mile later you're passing an old swingset and then headed to the end. At 3.8 miles you'll hit some doubletrack, but this is NOT the doubletrack that takes you to the top, you're on the opposite side of the creek, so keep going; just past the doubletrack you'll head back into the forest for a small stretch, and at 4 miles you'll hit the "pipeline". This is the last creek creek crossing.

At ~4.6 miles you are at the top, by the power lines. Take a left and head out to the street, knowing you have this thing in bag at this point. Victory is yours, taste it.